Hi. I’m Andrew Edwards from Wrexham and I’m 33 years old. I am pleased to be writing this blog for Autism Together to impart my experiences of being an autistic author.

After eleven and a half very happy years working for Manchester United Television as a broadcast statistician, I was made redundant on Monday 21st April 2014.  I left on extremely good terms as the time had come to, pardon the pun, move onto the next chapter of my life. I am still in close contact with around a dozen of the people I worked with over that period. I wasn’t bitter about leaving, it was time to go. I needed a change.

Unfortunately, though, in the aftermath of leaving M.U.T.V., a total and utter disregard for my autism and my family’s struggle was shown by the NHS Adult Services, who cut all of my support before I was even officially made redundant from MUTV. Their suggestion for care at this point was to leave me in a coffee shop unattended. My family wasn’t going to let this happen.

My family’s plan was for me to volunteer and write my memoirs on living with autism. Whilst I was looking for a publisher for my memoirs, I was honoured to be invited onto The Today Programme on BBC Radio Four, where I was interviewed about my life with autism by John Humphrys on Easter Saturday 2015. This interview lead to the publisher Bennion Kearny, who was listening to the broadcast, getting in contact. At near enough exactly a year to the minute of being made redundant at MUTV, I found out that I was going to be a published author.

My memoirs which are entitled “I’ve Got a Stat for You- My Life with Autism”, which is a play on words of an often repeated phrase of mine and my old job at MUTV, has sold over 700 copies since its release in October 2015. A great spin off from my memoirs book was being invited to The Houses of Parliament on Halloween 2016.

One thing that has helped my autism is exercise and that is why I decided to write my new book entitled “A Vision of Exercise: Tales from Inspiring People & Organisations” on Bennion Kearny Publishing, to find out if it had the same effect on other people. In my opinion, in the future, there should be more help and support to encourage people with autism to live healthier lifestyles. A 2016 research study from the UK Charity, Autistica, stated that even “high-functioning” autistic people can die up to eighteen years earlier than the average life expectancy.

Perhaps I have had an eventful life, but it hasn’t been easy. Throughout my adult life, even very recently, to this juncture, I have suffered from severe obsessional behaviours arising from my autism and mental health issues. In fact, as recently as during the second half of the summer of 2017, I am not afraid to tell you that without my coach Geraint Llyr Roberts MSc, and my training sessions with him during this time, I may not be here to speak to you today. For you see, not for the first, and probably not for the last time in my life, I was suffering with my mental health, this time arising from severe autistic obsessional behaviours.

Every day it is a fight to manage my autism, but on the vast majority of days, I can achieve this. However, I’d be lying if I was saying I can every day. Meltdowns do occur from time to time, but when I feel good, I can manage my autism successfully. 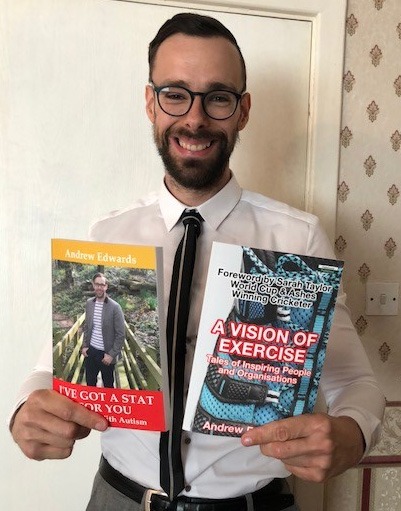 Andrew’s book is available to buy on Amazon for £5.99 https://amzn.to/2rbQNJr, and there will be a book signing at Waterstones in Wrexham on Saturday 12th May between 1-3pm.

Andrew will also be selling his books at Autism Together’s Summer Fair on Saturday 14th July in Thornton Hough.