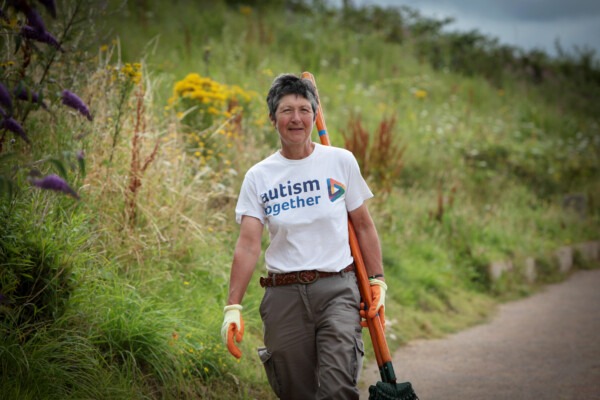 After five impactful and transformative years at Port Sunlight River Park, it’s time for us to say a fond farewell to our Park Ranger, Anne Litherland.

Autism Together has managed the 70-acre park on the picturesque banks of the River Mersey since August 2014, on behalf of The Land Trust, with Anne taking a leading role to turn the park into the community-focused, nature-friendly, leisure destination it is today.

A former landfill, the park is unrecognisable from those days, with a network of paths allowing the community to explore and enjoy the natural surroundings and birdlife, along with fabulous views across to Liverpool.

Anne pioneered many projects and oversaw many successful initiatives during her time as Park Ranger. Here are just some of her key achievements:

Terry Usher, who was the head of Autism Together’s Community & Vocational Services during Anne’s tenure as Park Ranger, said:

“Anne has overseen the transition of Port Sunlight River Park from the raw conversion of a landfill site, to the rich haven for plants and wildlife it has developed into today.

“Her time as Park Ranger has transformed a closed site into a community space that is visited and loved by many thousands of people, from all sections of society and from the local and wider communities.

“Anne has been the true driving force behind all this work and, due to her input, the River Park is in great shape to be enjoyed for many years to come.”

Congratulations Anne, for all you’ve achieved and thanks for all your hard work. Best wishes for all you accomplish in future.

Anne is succeeded in her role as Park Ranger by Andrew Jennings-Giles. Keep checking our News section – we’ll introduce you to Andrew very soon…