Skip to content
YOU ARE HERE:Home/Congratulations to our award winners!

Congratulations to our award winners!

The categories awarded during the gala event were; Community Autism Hero, Champion of Champions, Lifetime Achievement and Staff Excellence.

The Autism Community Hero winner was revealed as Dan Grace. Judges chose Dan for his dedication to a local autism-specific football team.

He had been nominated for the award by Liverpool parent and autism campaigner Julie Simpson, who said: “Dan took over as our footie coach at Autism Adventures (an organisation which provides social outings for families with children on the spectrum) four years ago but we weren’t making enough money to pay him so he did it voluntarily for the next three years and he never missed a session – he even bought his own equipment and kept the classes going through the summer for continuity for the kids. We’ve gone from two children to a whole team and we can now compete with other autism teams. Dan gives medals at the end of each year and knows all the names of the children. He makes them feel like Pelé.”

On winning the award, Dan said: “I was taken aback when I found out.  It was totally unexpected and I was lost for words. It’s all been really amazing.”

Everton FC were revealed as the winners of the Champion of Champions award.  This celebrates the dedication and achievements of the more than 40 organisations which are part of the Autism Champions scheme – organisations working together to make Liverpool the UK’s leading autism-friendy city.  In each Autism Champion, staff have received autism awareness training and made adaptations to premises – such as clearer signage and quiet spaces – to ensure their venues are autism-friendly.

Nigel Bennett, chief steward at Everton FC, said at the gala awards dinner: “This has been a wonderful event. The icing on the cake was walking up to collect our award to the traditional Z Cars anthem we always use at Goodison Park.”

Helen Benson was the posthumous winner of the Lifetime Achievement award, for her dedication and services to Autism Together throughout her life. Helen was a zealous campaigner and fundraiser, and continued to help until her last days in a hospice.

Winner of the Staff Excellence award was Alison Jones, a house manager at Autism Together’s residential centre, Raby Hall. Alison was chosen to receive the award for her committed work for the charity over the last 27 years.

Kim Adamson, parent of a Raby resident, said: “Alison Jones is an exemplary member of Autism Together. She has seen us through difficult times successfully. She has a positive approach and a cheery disposition. If problems arose, she came on duty early or stayed late. Because of her hard work and commitment to her role, she is highly regarded and respected by everyone.” 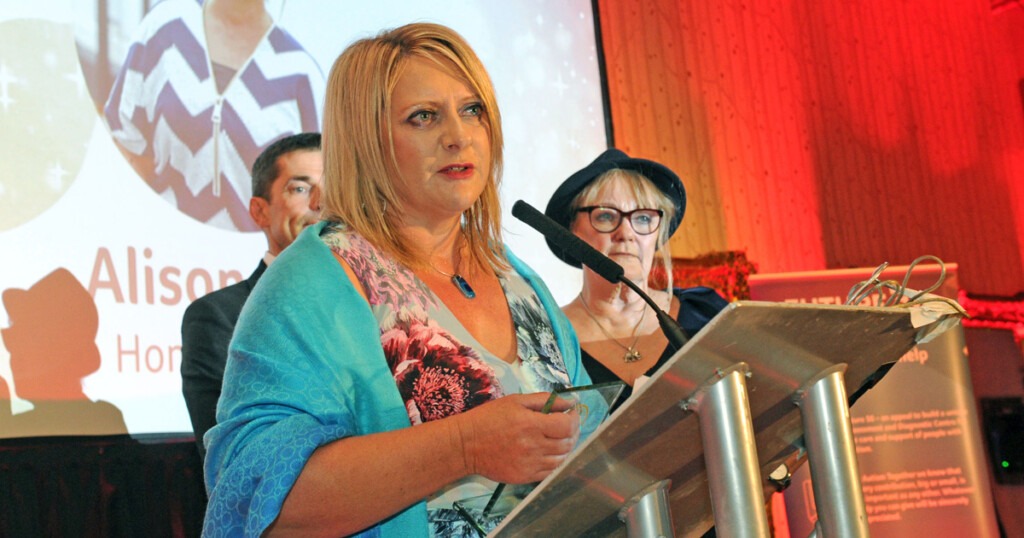 Over 200 people attended the gala event, which also raised money for the charity’s £2.5m Future 50 Appeal. This is funding the creation of a pioneering autism assessment and diagnostic centre in Merseyside.