Skip to content
YOU ARE HERE:Home/Chester Zoo goes ‘batty’ for autism awareness

A new style of signage at Chester Zoo is now helping visitors on the spectrum – especially those with sensory difficulties.

The Innovation Team at the zoo, which is currently appearing on our screens in Channel Four’s Secret Life of the Zoo, has been working closely with Autism Together to incorporate autism-friendly designs and systems.

The bat zone is one of only two exhibits where visitors share space with the animals. The new sign, which is located just outside its entrance, lets customers know what to expect inside the enclosure.

Victoria Thomas, Exhibitions and Interpretation Manager at the Zoo, said:

“Having the Autism Together logo on the sign helps direct visitors on the spectrum to the information. If you’re not comfortable at the zoo then you won’t engage with the wildlife, so we wanted to give as much advance warning as possible for what to expect in the enclosure as from the outside it’s impossible to tell. Inside the bat zone it smells and it is very humid so it lets visitors choose and be comfortable before they are at the doors.”

Chester Zoo has been a member of Autism Together’s Champion scheme since 2015, meaning that 10% of their staff are fully trained in autism awareness by experienced trainers from the charity’s Autism Training and Advice team. The award-winning zoo was one of the first organisations to be made a Champion, and has received great feedback regarding the adjustments and autism friendly approaches that the staff there have used, with some staff taking extra training to become autism ambassadors.

“The training given by Autism Together has been very influential in the decisions we have made as a design team. The logo is a subtle way to let people with autism know that we are giving them information. Our next step is to introduce the sign at the aviaries enclosure, as this is another experience where visitors share space with the animals.” 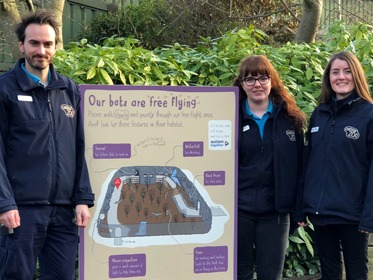