The taxi firm, which has over 650 drivers across Wirral, contacted the charity after hearing about its biggest-ever fundraising appeal. Argyle Satellite has paid to have four Wirral licensed black cabs liveried, promoting the Future 50 Appeal.

The branded taxi made its debut at the charity’s recent appeal launch at 30 James Street, where both the Lord Mayor of Liverpool, Malcolm Kennedy, and the Metro Mayor of the Liverpool City Region, Steve Rotheram, were its first passengers.

“As a business we recognise how autism affects our passengers, drivers and staff members directly and indirectly every day.  Whether it be through our working day or in our family life, autism touches all of us in some way. We have chosen to support Autism Together for several reasons. Yes, we want to raise money throughout the year for the Future50 campaign, but more importantly we want to raise awareness of Autism Together. We are using our social media platforms to share and promote stories about the exceptional work Autism Together do, especially for the people of Wirral.”

Autism Together is the first charity to be promoted by the company after Argyle joined with Wirral Satellite Cars last year. The charity was chosen as a number of staff at the firm is directly affected by autism, and colleagues wanted to do something to help.

The firm is also taking part in lots of fundraising activities, including golf days, fishing tournaments and the three peaks challenge.

“It was fantastic to see our branded Future 50 taxi at our launch night at 30 James Street – Argyle Satellite Taxis has been very supportive of our appeal and it’s great to see a local firm getting on board with promoting our biggest appeal yet. Argyle has lots of fundraising events planned to help raise the vital funds we need and I am looking forward to seeing what the next year will bring in partnership with them.” 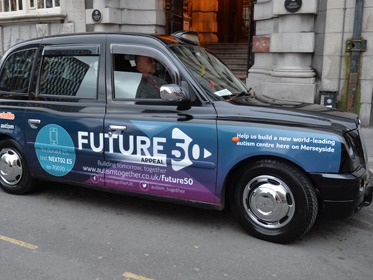 The branded taxi made its debut at the charity’s recent appeal launch at 30 James Street, where both the Lord Mayor of Liverpool, Malcolm Kennedy, and the Metro Mayor of the Liverpool City Region, Steve Rotheram, were its first passengers.