The Willows – An ‘Outstanding’ Care Home. 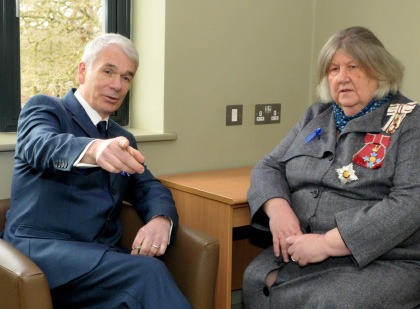 The Lord Lieutenant Of Merseyside Dame Lorna Muirhead views one of the new rooms at The Willows with Manager Tom Grant during the official opening in April 2015.

“We were delighted with the Inspectors report and see it as regconition of the hard work and dedication of the whole team in providing care ‘in a safe way and in a safe environment.'”

The Willows, an autism specific care home in Wirral, opened by Autism Together in April 2015, has received the highest accolade possible from the Care Quality Commission (CQC) by being awarded an ‘outstanding’ grade in it’s first official inspection in November 2015.

An ‘outstanding’ grade is the Gold Medal of social care and the CQC inspector praised it’s ‘specialist training’ for staff to ‘ensure people’s independence was promoted’ in a building ‘designed and built around the needs of the people who would be living in it and this had made a significant difference to their quality of life’.

The CQC also said “People and staff were seen to be getting on well together and staff demonstrated that they had their people’s care at the heart of their practice. We saw that the relationships and the communication which people had within the home were positive, enabling and therapeutic. People’s independence had been promoted markedly to the point that some had become self-caring in many aspects of their lives”.

The Inspector also mentioned how the service at The Willows was happy to collaborate with families of service users, including feedback from family members in their comments such as “The building has made a great difference. He’s becoming a lot more independent”. Another relative said “The training is very good. It’s a very tough job but they are well equipped for it”.

Work with other healthcare professionals was described by the CQC in their findings “an innovative scheme was being piloted at the home with staff from NHS and the service, working co-operatively and collaboratively together, to enable people to live in the community.”

The Willows, a home for life for eight people, incorporates many features designed to create a calm, nurturing environment. ‘Mood’ lighting is used to ‘paint’ rooms different colours and help calm or stimulate a resident, curved, wide corridors reduce claustrophobia and crowding, and to prevent echoing in the main corridor, the ceiling height has been reduced at one end. Under-floor heating and integrated window blinds mean that light and temperature can be minutely adjusted creating bespoke environments for each resident. This is important as people with autism can be extremely sensitive to light and heat. Easy access is offered to open air and the grounds, which are in a rural setting. This helps residents control anxiety levels.

Carers, who received world class training from Autism Together’s in-house team,  help residents learn to use the modern laundry and kitchen facilities, encouraging them to develop a sense of independence in their day to day lives and received a special mention from the CQC for how keen they were to enable residents  “to grow, develop and achieve their potential.”

Chief Executive of Autism Together, Robin Bush, said, “We are hugely proud of the staff and residents at The Willows for all they have achieved during it’s first year, we consider all our services to be “outstanding” but to have this verified by the CQC is fantastic. We work exceptionally hard to ensure that everyone has access to the highest quality support and we hope to build on this accolade and achieve more outstanding ratings in the future.”

Tom Grant, Registered Manager of The Willows, said “We were delighted with the Inspectors report and see it as regconition of the hard work and dedication of the whole team in providing care “in a safe way and in a safe environment.”. We pride ourselves on creating a home for all our service users and by prserving our attention to detail in the maintenance of the facilities we aim to support the growth and independence of our residents in the future.”

The CQC Report can be found here.

This year’s World Autism Awareness Day takes place on 2nd April and all of Autism Together’s awareness raising events can be found here.