Skip to content
YOU ARE HERE:Home/Biometrics could be a ‘game changer’ in autism care

Biometrics could be a ‘game changer’ in autism care 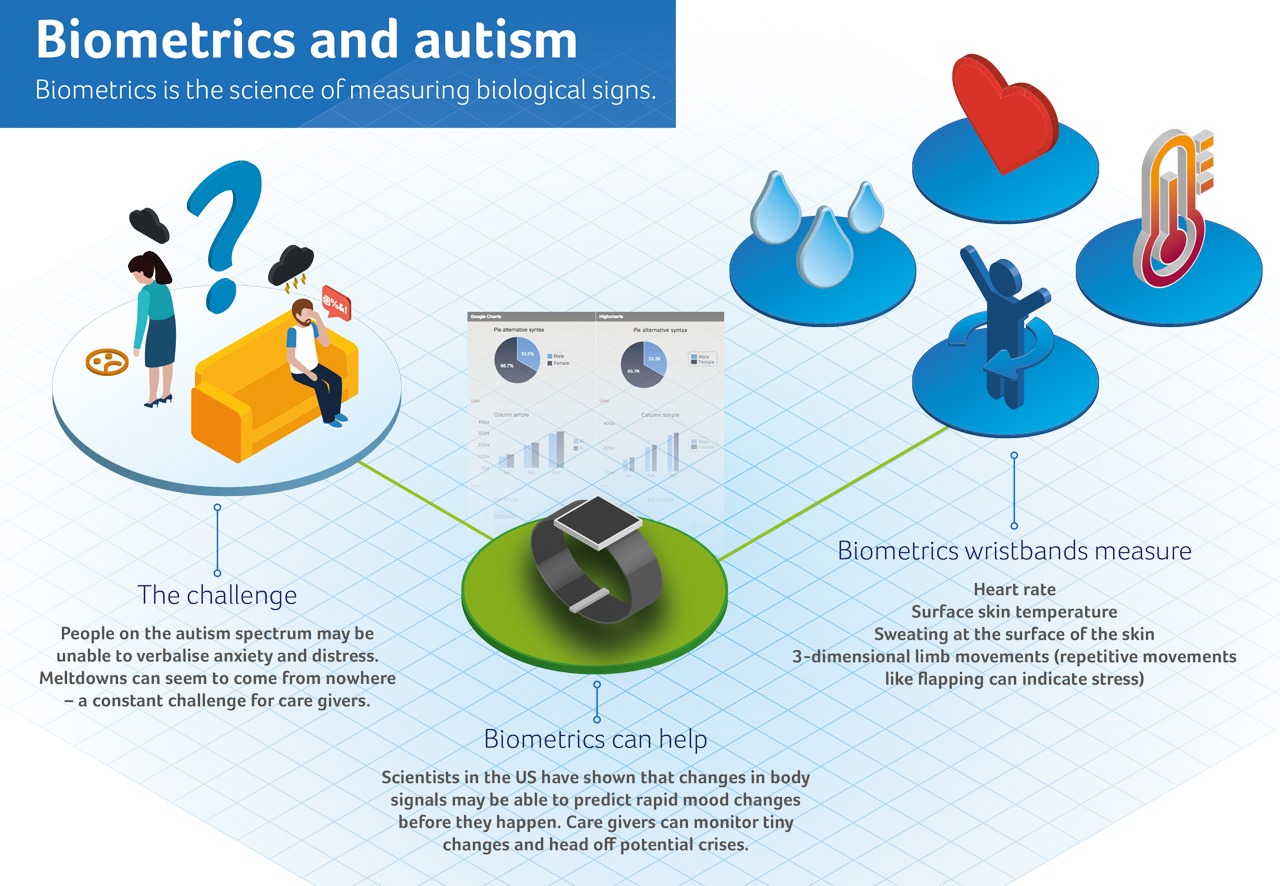 Charity Autism Together has launched a £2.5m appeal to fund a ‘game-changing’ high-tech project with the potential to transform the care of those with severe autism.

The North-West charity and service provider, which employs a thousand people across Merseyside, North Wales and Cheshire and specialises in the care of people with extremely complex autism, plans to build a world-first autism assessment and diagnostic centre in Wirral where biometric technology will be used to ‘see inside’ the bodies of people on the spectrum.

Biometric technology measures minute physiological changes such as surface skin temperature, heart rate and sweating. Lightweight biometric wristbands can be worn by people with autism who may be non-verbal or unable to communicate how they feel.  Realtime readings from the wristband will help carers identify periods of high anxiety, enabling them to step in and head off any dramatic behaviour changes.

An initial trial with the wristbands – the first of its kind to take place in the UK – will begin this spring with seven residents at an existing care home in Wirral run by Autism Together.

During the trial, information on anxiety levels will be cross-referenced with detailed staff notes on the dates, times and locations of behaviour changes and extreme incidents. Staff will be noting levels of heat, noise and light in each situation – such as loud TVs, bright sunlight or hot radiators – and merging this data with biometrics readings to understand how people are reacting to sensory stimuli.

Three quarters of people on the autism spectrum experience sensory differences and may have to endure painful reactions to stimuli such as loud noise, unusual texture, heat, smell and bright light.  This can cause considerable distress which they are unable to convey to their carers and can often be the root cause of unpredictable behaviour including violent meltdowns.

It wasn’t until the early 2000s that sensory differences were acknowledged as a key facet of the condition and this is the first time that biometrics will be used to reveal how people on the spectrum react to everyday environmental stimuli.

CEO of Autism Together, Robin Bush, said: “This is a very significant project backed by a real sense of urgency as the numbers of those diagnosed with autism increase and the NHS still relies on traditional approaches – such as observation only – to try to get to grips with complex autistic behaviour. Introducing this new technology into autism care will be game changing – but we can’t build our assessment centre without funding and we hope our supporters will get behind us.”

NHS figures from 2015 show that as many as 24,000 people with learning disabilities or autism were at risk of admission to hospital, revealing the large number of people at crisis point at any one time.  Later figures, from autumn 2017, show that a third of people with autism in hospital had been there for two years or more. *

Autism Together says these figures represent a national placement crisis. People on the spectrum are often marooned in hospital because healthcare staff do not have the expertise to understand their behaviour and can’t find suitable community placements for them. When residential placements happen, they often go wrong because support staff, again, are not able to understand complex autistic behaviours.

The Future 50 appeal and building project will see the charity’s original residential home, Raby Hall in Wirral, replaced with an autism-specific building suitable for up to 12 patients. The project will roll out in stages over a five-year period and the charity is already planning future applications for biometric technology within the building.

Biometrics in the field of autism has been studied over the last decade by a team of US scientists from Boston’s Northeastern University, Maine Medical Centre and the University of Pittsburgh. Having developed biometric wristbands, they then collected thousands of examples of challenging behavior from 20 young people with autism.

Northeastern University’s Dr Matthew Goodwin said, “Our original concept with biometrics was that we couldn’t bring people with autism into the lab, so we would take the lab to the world in order to learn about autistic behaviour.”

The scientists established that body signals collected through biometrics can predict sometimes violent behavioural changes before they happen.

Robin Bush said: “Our vision at Autism Together is to set the standard for a new generation of inpatient assessment and treatment using a high-tech approach, so that people with autism can be fully understood and helped to live the best lives possible. We’re convinced that in fifty years biometrics will be accepted as a baseline for understanding autistic behaviour.”

For more information on the Future 50 appeal: https://www.autismtogether.co.uk/future50/

Three quarters of people on the autism spectrum experience sensory differences and may have to endure painful reactions to stimuli such as loud noise, unusual texture, heat, smell and bright light.  This can cause considerable distress which they are unable to convey to their carers and can often be the root cause of unpredictable behaviour including violent meltdowns.