Skip to content
YOU ARE HERE:Home/Autism Friendly and Bacon at the Tate

Autism Friendly and Bacon at the Tate

Rick Myers and I, as part of Autism Together’s fundraising team, had the opportunity to run a small stall in the main foyer of Liverpool’s Tate Art Gallery on Tuesday 9th August and, in short, this was an incredibly positive experience. 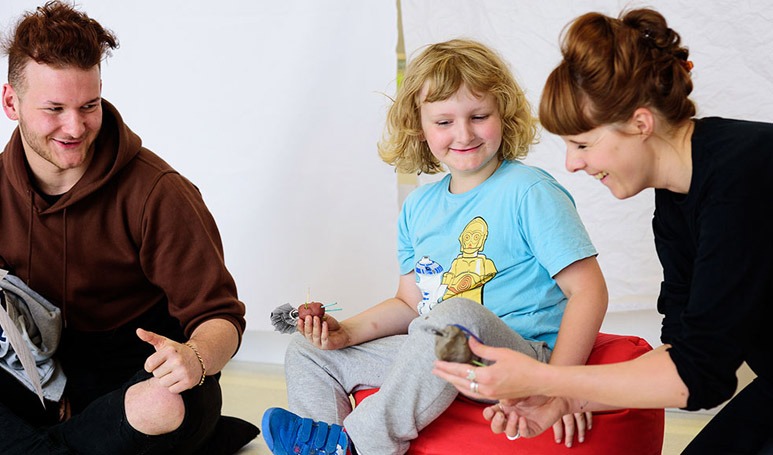 As art enthusiasts ourselves, we know that The Tate have always been eager to involve and introduce younger audiences to some of the worlds’ most influential modern artists. The current major exhibition running in The Tate museum is ‘Francis Bacon: Invisible Rooms’, and whilst Francis Bacon’s infamous ‘carnivalesque’ style may not immediately strike some art connoisseurs as being particularly child-friendly, the Tate’s recent Clay Worlds drop in sessions establishes a space where children can openly express themselves, all whilst learning about an incredibly complex yet approachable style.

It is a fantastic exhibit that is near perfectly tailored for those on the spectrum. Considering that this is their first ever ‘autism-friendly’ drop-in and that they attracted over 70 families throughout the day, this is an amazing achievement.

In response to this attitude that Bacon may not be appropriate for children, I feel that it is important to argue that, writing as a woman with Asperger’s Syndrome myself, Bacon’s obscure style could potentially be an incredibly expressive tool at an autistic individual’s arsenal.  Bacon’s works arguably reflect how emotion should be perceived by others, and I believe employing his style in any medium provides a unique outlet for self-expression.  In the case of people on the spectrum, I feel that it would be a style of particular resonance to us as it can be impeccably difficult to effectively communicate how we feel on the inside.  His works can even be described as comic – one child mentioned that he ‘loved the funny faces’ and that he liked making his ‘own that way’. 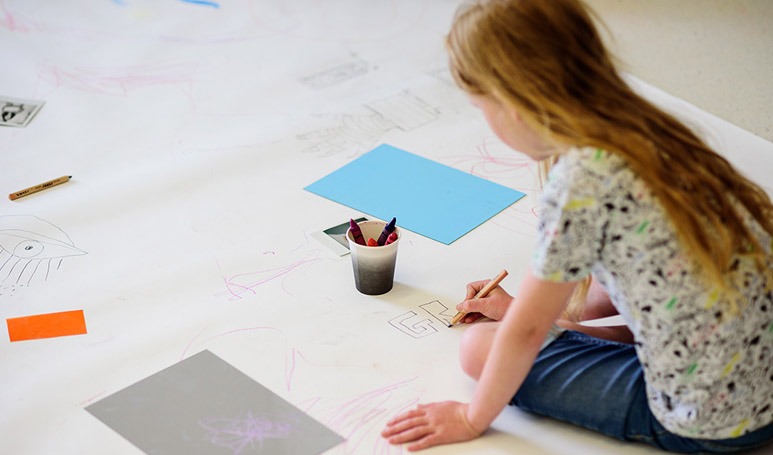 In this sense, Bacon’s work is certainly something that younger audiences could approach with ease.  What particularly picked my interest was how the session intends to use clay, wire and other materials to create these otherworldly objects.  I know that the younger Aspie in me would have found creating clay models very therapeutic, so I was delighted to see that so many younger children enjoyed the sessions.  One little boy even approached me on the desk to show me the pieces that he and his brother made and it was very clear to us both just how engaging and enjoyable these drop in events actually were!

The Tate made a variety of reasonable adjustments to make the experience more inclusive to the needs of autism.  Low level lighting was employed not only in the studios, but also throughout the entirety of the building itself.  The layout of all the exhibitions on the site seem to be incredibly sensitive to the needs of individuals with diverse needs and many visitors who came to see us commented on how friendly and supportive The Tate staff were in response to their visit.

We received no complaints as to the set-up of the sessions, and from our observations, staff members were incredibly sensitive to the needs of those with autism and we eager to receive any suggestions for improvement.  Our only suggestions for improvement at the current time of writing were as follows; to establish ‘autism spaces’ where parents and children can recuperate in the event of potential sensory overload, and to include visual structures and PECS cards that children and families can openly access in order to make visits to any exhibits smoother.  One child in particular struggled returning the rather spectacular Spaceship Bag available for rental to children in the foyer; we thought that a quiet space or a PECS card may have helped the child in that instance. Alternatively, if this requirement of the activity was flagged up the parents prior to the visit (on the website, perhaps? ) then the child could be guided through how best to achieve relinquishing the article. This could be used for any temporarily borrowed items.

The layout of all the exhibitions on the site seem to be incredibly sensitive to the needs of individuals with diverse needs and many visitors who came to see us commented on how friendly and supportive The Tate staff were in response to their visit.

The feedback received was incredibly positive.  Many parents were delighted with the event and are just as eagerly anticipating the next autism-friendly event, planned I believe, for October, as we are. While one parent commented that they go out as a family anyway, the knowledge that an autism-specific safety net is of great comfort and provides them with a sense of security.

Lesleyann Walsh said the following on our Facebook page:
‘There was so much to do and best of all it didn’t cost a penny!  Happy kiddos, happy mummy.  You need a projector now to test it out!  We have two more similar. Going to put them in Dylan’s tent once dried.  Would be fab with a torch!’

The successful outcome of The Tate’s workshop did touch upon an issue that unfortunately so many families experience, however, and that was the lack of public provisions available to individuals on the spectrum and their families.  In this day and age, we still read of stories in the papers that make us cringe.  Members of the public still stare and judge a youngster experiencing a meltdown in public.  We still take side steps away from adults stimming inappropriately on buses or trains for comfort. We still do not always know how to respond to the older autistic woman in the corner of a busy family party, rocking and vocalising to herself because the music is too loud and the lights are overpowering.  We may believe that autism to be more than the ‘A’ word, but without the tools or autism-friendly facilities, we risk failing an incredibly valuable yet simultaneously vulnerable social group.  Autism spectrum conditions are not ‘bad’ or ‘inappropriate’ behaviours; they are conditions that require just as much attention and consideration as those with visible disabilities. 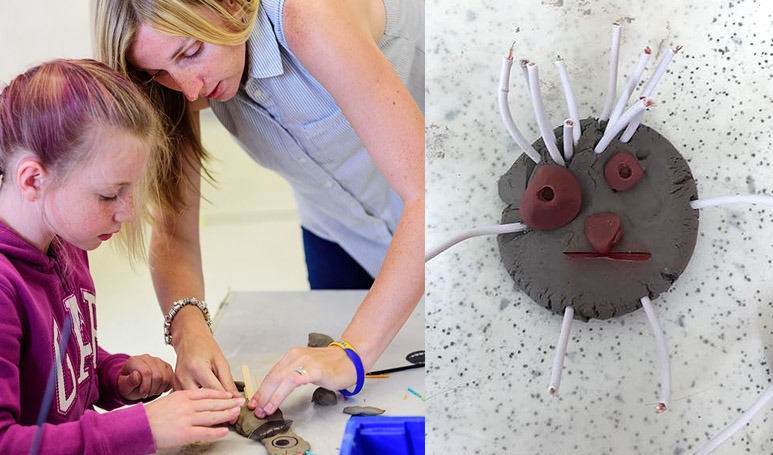 There is no doubt The Tate’s Clay Worlds drop in sessions serve as a positive example of how to adjust public events adequately for their needs.  We commend The Tate gallery for facilitating such a magical space for families and children who often find it difficult to access these facilities on a regular basis.

It is our hope that The Tate continue running these incredibly successful ‘autism friendly’ sessions as it is evident that the gallery has the potential to provide a leading example of how to make art sessions – or indeed any public or social event – accessible to the autistic community. 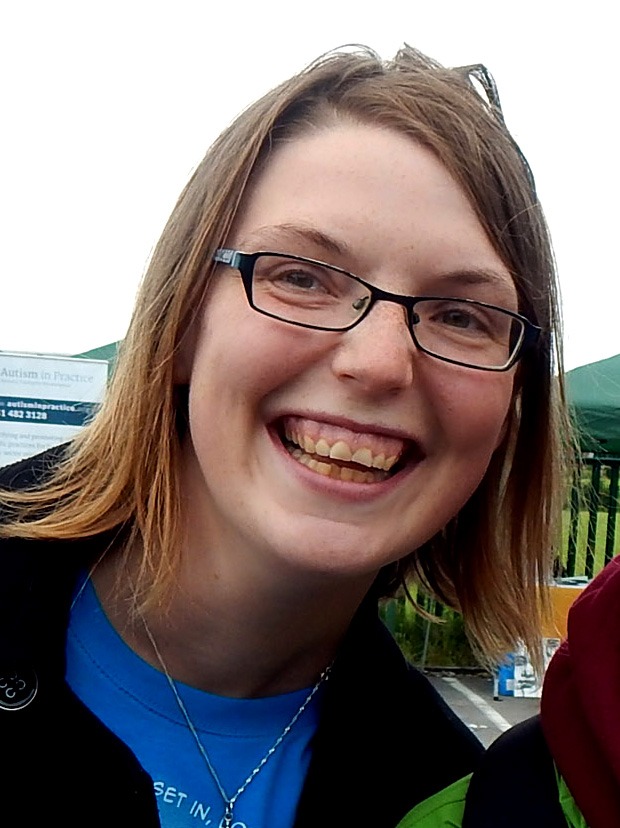 April Ryan, Administration Assistant at Autism Together, joined Rick Myers (pictured below), Community Fundraiser at a recent autism friendly event at Tate Liverpool, this is her full report on their day. Thanks April. 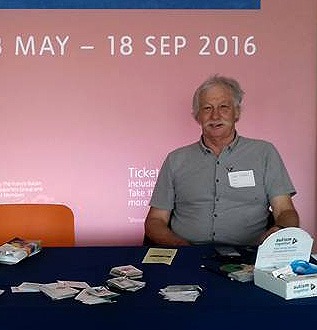