Clayton and Howard went to Santa Susanna in Spain for week’s holiday this autumn. The men were booked into an all-inclusive hotel which had all of the things that they liked. Despite the early start the flight was good and, armed with his visual schedule, Clayton matched up the pictures of his hotel with the real thing when the bus dropped us off so we knew we were at the right place!

We had a relaxed day the first day getting our bearings and Clayton got the first keyring of the holiday for his collection. The next morning brought a nice sunny day and we met the holiday rep to see what was available and to get some local information. We booked a trip to Barcelona which included sightseeing and the dancing fountains. We would also have time to visit the Zoo as independent travelers. The rep gave us info about local transport and good things to see so, armed with all of this information, we planned our week.

Visual information was a cornerstone to the holiday and Clayton had a daily schedule that we planned each evening for the next day. Clayton then had time to process this information as he relaxed before bed. This visual schedule helped Clayton navigate a new place and new activities in a relaxed manner and he himself told staff that his schedule helped him stay calm.

Howard was new to visual information however we felt it was a good time to try some simple visual choices with him as he was relaxed and supported on a 1:1 basis. When we got to a quiet café, we offered Howard two drink choices using pictures of two of his favourite drinks, coffee and coke. Howard was showered with praise for each positive attempt he made which he appeared to really like and we saw a number of smiles. On the fourth attempt, Howard appeared to ‘get it’ and was very pleased with himself indeed (and rightly so). Clayton took it upon himself to show Howard his schedule when he was making a choice so he could ‘help him learn’ – there wasn’t a dry eye in the house!

During the week we rode two different road trains to two very different destinations, visited a 2-mile-long market, had a great day in Barcelona visiting the Sagrada Familia, the Barcelona zoo and the dancing fountains. Clayton embraced the nation’s love of a siesta and Howard became increasingly confident in making choices. During one evening’s entertainment, a group of acrobats were performing and encouraged audience participation to do the limbo. Clayton was keen to join in and he went up on stage with other members of the audience. Clayton was dancing away and took his turn to walk under the limbo bar. He later got a photograph with one of the acrobats. All of the photos and videos were put on his iPad so he would watch a re-run of his day when he got back to his room at night. 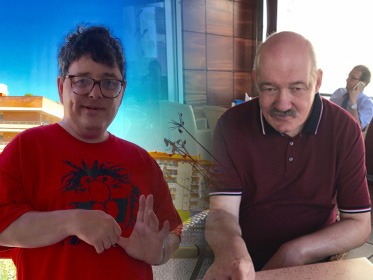 There were so many highlights of the holiday that we were hard pressed to choose the best. For Howard, it appeared to be the praise he received for all his choices during the week and the many smiles. For Clayton, it was coming home with 10 new keyrings for his collection and his schedule which he took everywhere with him. For the staff, we would have to say, Howard’s expression when he ‘got’ the purpose of the picture cards in choosing his drinks and Clayton’s pure happiness when he was dancing on the stage and doing the limbo.

Howard and Clayton appeared to get on well in each other’s company, so much so that Clayton asked if he can go to Spain with Howard again!