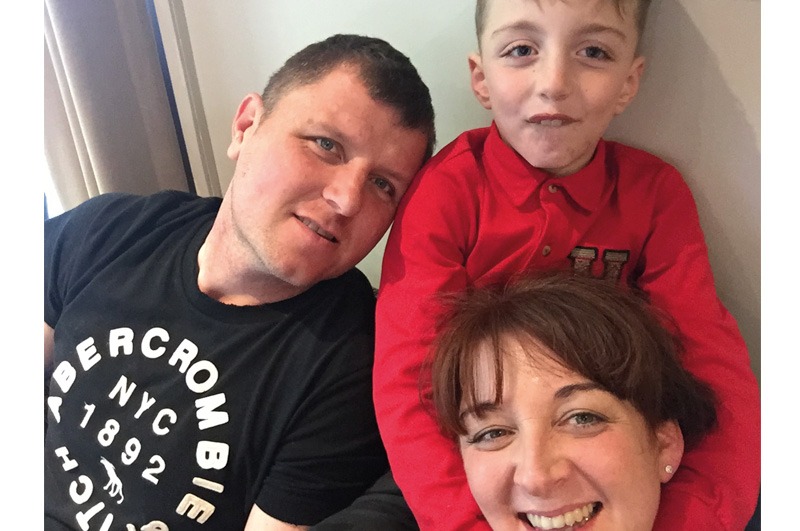 Just like any other child, Harry needs shoes and they need to be properly fitted. It was an absolute godsend to find out that Clarks at New Mersey retail park in Speke offer an autism-friendly shoe-fitting service through the Liverpool Autism Champions scheme.

My son Harry is eight. He was born with global development delays and has many of the same traits as someone with autism. He has issues with speech and was non-verbal for a long time and just made noises. These days he tries to talk more and uses Makaton and PECS to communicate.


Harry’s getting on very well at a special school. He needs a routine-led day. Everything has to be done in a certain way and at a certain time. He also has medical issues. His iron is low and he has thyroid issues. He’s on medication every day and is being monitored by specialists at Alder Hey.


Even though he does have mobility issues, Harry loves football and goes every Monday to a club at Everton. He also goes to a playgroup and likes to do after school and weekend activities for children with special needs. He loves spending time with his cousins and playing with his toy cars and teddies. His favourite movies are Home Alone and Home Alone 2 – he’s watched them about 30 times.

Harry has absolutely no sense of danger or social awareness so we usually take him out in his buggy. At the shops, he makes loud noises and people stare and he gets stressed and upset in queues. We try to go to as many places as we can, but it’s hard. Usually, me and Martin are a tag team. I’ll run into the shop and he’ll wait outside with Harry or vice versa.

Sometimes we just have to go into stressful environments to get things done. If we do, we’ll stop at Starbucks and have a Frappuccino to break things up. But if we’ve promised we’ll stop for a drink and that doesn’t happen, Harry gets really upset. Everything is very rigid and has to be carefully planned.

We hear a lot of tutting. When Harry’s in his buggy lots of people are understanding but in restaurants you can tell people are thinking that he’s just an unruly child. You have to have a tough skin but it can be upsetting. I wish people were more accepting.

Once when we were out we visited a little coffee shop. There was a young girl on her laptop. Harry took a liking to her and just went over. He gave her a hug and a kiss and she was fine about it. Some people are OK but others are stand-offish.

Just like any other child, Harry needs shoes and they need to be properly fitted. It was an absolute godsend to find out that Clarks at New Mersey retail park in Speke offer an autism-friendly shoe-fitting service through the Liverpool Autism Champions scheme. We booked a slot at 9am on a Sunday. The lights were dim and it was really quiet.

The staff let Harry explore the shop first then, when he was ready, they tried to measure his feet. He was more interested in the iPad they were using to record the measurements, so they found a spare one for him to experiment with.

One of the assistants, Amy, was so gentle with Harry. He taught her how to sign ‘thank you’ and ‘I’m fine’. She came down to his level and was gentle and soft and even when he was snatching at the iPad she wasn’t fazed.

Harry tried on loads and loads of shoes then went behind the cash registers and rang up his own shoes before putting them into a bag. He was thrilled. He got school shoes with flashing lights on them and pumps for PE plus some trainers for out of school.

The Clarks staff had had to come in early and set up the shop. They went the extra mile for us: there was no queuing and no noise. We felt as if we were important to them and it was really good. We’ll go there all the time now.

I feel as if other places are starting to come on board with being autism friendly. At our local supermarket the staff are amazing. They’re always interested in Harry and they want to know what they can do to help. When businesses are like this, it makes life so much easier. It gives Harry a sense of independence, too. He shouldn’t just be strapped into his buggy, he should be able to walk around and feel that he’s done something worthwhile that day.

Debbie lives in Liverpool with her son Harry and husband Martin. New Mersey retail park is one of our Liverpool Autism Champions.