In 1968 a group of parents established The Wirral Society for Autistic Children, which was the forerunner for our organisation today. Autism Together has grown from providing support to people with autism, to providing a wide range of living options, day services and community support to people from all over the UK. 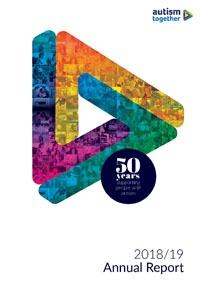 Our charity’s 50th anniversary year gives us an opportunity to pause for a moment and reflect on how far society has travelled in its understanding of autism. Undoubtedly, our knowledge of the condition has increased in leaps and bounds. This report reveals the action we have taken to support those on the spectrum over the last year and our plans for the years ahead 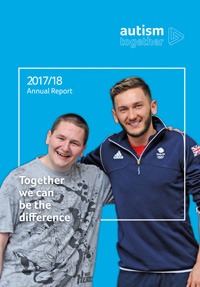 Now Autism Together has taken an even more pro-active approach, with the work that we have been doing over the last few years and with the launch of the Future 50 Appeal. We are no longer waiting to see what happens and responding to the future, we are taking control and shaping it for ourselves.

If you were to slice through Autism Together you’d see passion written right through each and every one of the people who work for us and are associated with us.  With passion comes energy, positivity and a desire to get things done, a togetherness and shared sense of belief that no matter what challenges lie ahead we can meet them head on and continue to support people on the spectrum to achieve their full potential.

Our Vision and Values

We have four key value statements that underpin our approach to the work we do as an organisation and as individuals:

Autism Together is a leading specialist provider of innovative services for people who have and who are associated with autism. 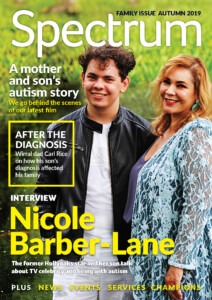 Check out the autumn edition of our bi-annual publication, Spectrum.

A ‘Family Special’, our lead article is an interview with former Hollyoaks star Nicole Barber-Lane and her son Ben, who has autism.
Wirral dad Carl Rice talks to us about how his son’s autism diagnosis affected his family and we go ‘behind the scenes’ of Autism Together’s recent big screen commercial.
Other articles include a look at PBS in practice, news on our latest Autism Champions and a fundraising update…

Wirral Autistic Society was formed in 1968 by a group of forward thinking parents who were concerned at the complete lack of services available for their children.

Research shows that specialist education and structured support can really make a difference to the life of a person with autism.

No two people with autism are affected the same way so at Autism Together we work with each individual person to help them overcome or soften the impact of these difficulties, to enable the person to lead a fulfilling and meaningful life.

As a specialist provider of support to individuals with autism, Autism Together recognises that each person has a right to live their life as they determine. In recognising this right we create a shared understanding of each person’s strengths and needs, and ensure that the individual’s preferred way of communicating these is respected and implemented by all our staff.
Our philosophy remains firmly rooted in a belief that:

We begin with what people can do, not with what they can’t do by listening to the person with autism and acknowledging that they are the expert in their autism.
Our support begins with the person and a shared understanding of what is important to them, and what their strengths and needs are.
Our support approaches are individualised so that staff can communicate in different ways depending on each person’s communication needs. Staff are all consistent in the way they use communication strategies with individuals.
People with autism can and do learn and change and our support approaches are focussed on developing life long learning.
Our autism strategies help people develop skills by taking into account their communication needs, thinking patterns, social understanding and sensory differences. 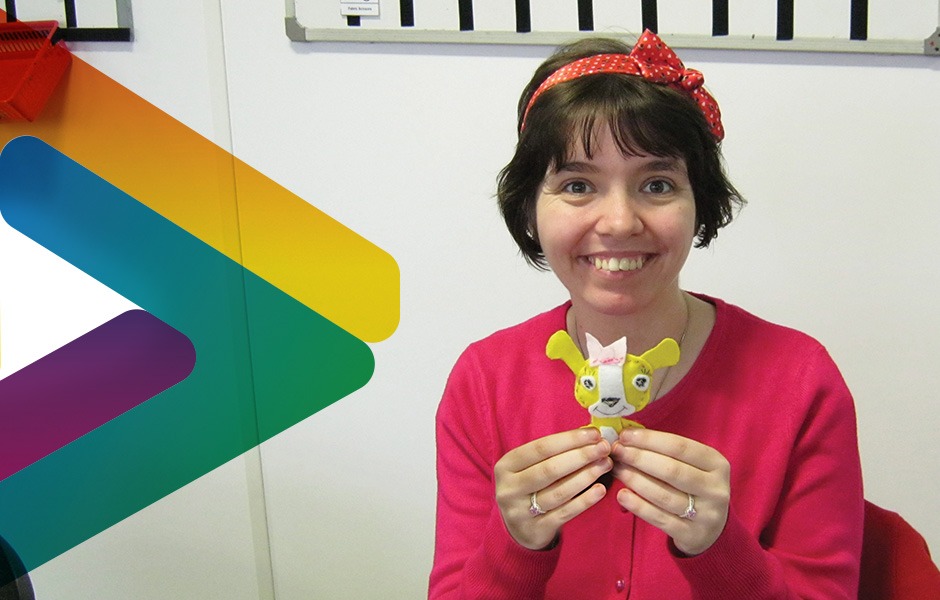 Autism is puzzling even to experts, so it is little wonder that it has given rise to many misconceptions. Here we answer the most commonly asked questions.

Although it was first identified in 1943, there are still many myths surrounding autism. However, public understanding of the condition is crucial in order to help improve the lives of people with autism throughout the UK.

Although it was first identified in 1943, there are still many myths surrounding autism. However, public understanding of the condition is crucial in order to help improve the lives of people with autism throughout the UK.

Autism is part of a family of conditions called Autistic Spectrum Condition (ASC). It is a lifelong condition but, with the right support, people with autism can achieve fantastic things. People with an ASC may require support in four areas:-

Communication
Interacting with others
Imagination and flexibility
Sensory processing

Do people with autism have special talents?

A recent study by the NAS reported that almost 80% of people who filled in the survey who did not know anyone with the condition thought that having autism meant having savant abilities, similar to Raymond Babbit in Rain Man. However, ASC affects each individual differently and to varying degrees of severity. Some have learning disabilities while others have average or above average intelligence. It is thought only around 1 or 2 in 200 individuals with an ASC might have a genuine savant talent (NAS).

The exact cause of autism is still not known. Research suggests that genetic factors are important. Currently, a great deal of research has focused on locating “the autism gene”, however, it is suggested that there may be as many as 10 different genes involved in the development of autism.

According to Stephen M. Edelson from the Center for the Study of Autism, there is a greater likelihood that identical twins will have autism than fraternal twins. However, the condition is complex. It is likely that other as yet unidentified “environmental” factors have a bearing on the development of the condition. Scientists have yet to fully answer why one identical twin can have severe autism, whilst the other will have a milder version.

Everyone with the condition shares a difficulty in making sense of the world. Autism is often described as being like a jigsaw puzzle with a piece missing. Donna Williams, a renowned author in the field who is autistic herself, tells us that for her, autism is more like “one bucket with several different jigsaws in it, all jumbled together and all missing a few pieces each but with a few extra pieces that didn’t belong to any of these jigsaws.”

How do families cope?

Raising a child with ASC places extraordinary demands on parents. In public, people may stare and make rude comments, assuming the child to be naughty. Parents may not have much time for themselves, each other, or their other children. They may make use of respite services which aim to provide an occasional break from responsibilities. A constant worry for many is concern over future care-giving, and so residential communities are an attractive option.

How common is autism?

What help is available?

There were times in the past when people with autism would likely be consigned to a locked hospital ward or mental institution. Thankfully times have changed. A lot has been achieved over the past few decades, with many autism specific services being born out of parent driven movements just like WAS. Media reports on cases of autistic people, particularly adults, being ‘failed’ by the system suggests that there are many gaps in service provision. There is clearly more still to do. A large proportion of adults with ASC will continue to require some degree of support throughout their lives. Due to the breadth of the autistic spectrum, the kind of support needed will vary. For some this may mean occasional guidance in order to help them lead an independent life in the community whilst for others it may mean full-time support in a staffed home.

How is autism treated?

There is no known cure for autism. The nature of the condition is complex, and many interventions have been developed over the years focussing on special education, behavioural and communication techniques, biomedical treatments, and complementary therapies. However, few interventions have been independently or scientifically evaluated. It is agreed however that structured support and early intervention can make a big difference to the life of someone with autism.

Since our inaugural meeting at Raby Hall on Saturday, 2nd November 1985, the Family & Friends Association (formerly the Parent Staff Association) has proved to be a valuable forum where parents, siblings, friends and staff can meet to exchange ideas in a friendly and informal atmosphere.

At the first meeting, the aims were outlined as:

House magazine to be produced by staff, containing thumb-nail profiles of staff and residents.
No formal election of committee or officers, but ad hoc sub-groups can be formed for particular functions.
Staff at meetings to report on past and future activities and possible parental/family involvement.
Although fundraising is not a main aim of the Association, opportunities may arise for possible fundraising.
Meetings to be held 3 times a year, with Saturday afternoon as most convenient.
Volunteers to act as Chairperson on a rotating basis.
Items for future discussion can be put on the agenda.

In 1985, to provide a forum for parents to have contact with staff, the Parent Staff Association was formed. In those early days, there were only 18 residents and 28 staff – a far cry from today when we have significantly more service users and staff!

The first meeting was attended by 25 parents and a decision was taken that subsequent meetings would be informal with a regular Secretary to take minutes and a Chairperson chosen on a rotating basis.

The meetings were to be held four times per year ( this has since reduced to three) and a senior member of staff would report on progress. A decision was made that no individual client would be discussed at the meetings. Members suggested that each parent should contribute £12 per year (£24 per couple) – this has since increased to £15 or £30 per couple. This money would be used to buy a Christmas gift for the staff as a way of saying thank you and also to avoid the difficulty where some staff were bought presents by individual families and some were not. For many years, this took the form of a bottle of wine, but from December 2012, due to rising staff numbers and logistical problems, the wine was replaced by a quarterly Staff Appreciation Draw with cash prizes.

Funds are also used for buying small extras for the use of the clients and over the years we have purchased items ranging from a vacuum cleaner to a music synthesiser to a pottery kiln.

The contribution is purely voluntary and is not a membership fee as such, because each parent is automatically a member by virtue of being a parent or carer. The money is purely a contribution to funds.

In November 2004, the group’s name was changed to Family & Friends of WAS Association to better reflect the input of siblings and friends.
Membership Information

The current Secretary of the Family & Friends is Carole Battersby.

When new clients join our services, either residentially or as a CVS attendee, a welcome pack is sent out by Babs Williamson, the Admin Manager based at the registered office. The pack includes a welcome letter from Carole, the date of the next meeting, a copy of the Aims & Objectives, the previous meeting’s minutes and a Banker’s Order form should you wish to make an annual contribution.

This contribution is entirely voluntary and is not a condition of membership of the Family & Friends, which is an automatic right of all parents, family, friends and staff.

If you do decide to contribute, please obtain a Banker’s Order Form from the Admin Manager at the registered office.